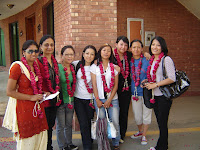 In the recent conference of South Asian Women in Media (SAWM) held at Lahore, Pakistan, it was evident that media women in South Asia, notably in Bhutan, are very complacent with their work.

This is good news. Most of the delegates from other countries made it a point to interact with the Bhutanese delegation, speaking about how lucky we are and at the same time, trying to dig out information about the problems that we face, using their journalistic skills to make a headline story with the information.

Well, such discussions also made the Bhutanese delegation realise the fact that complacency may not be for their own good all the time.

It’s good to be complacent and happy about what you are doing in life but at the same time, the question arises, do people grow when they are too complacent about everything.

It was noted during the conference that Bhutan does not have notable media women holding the top most position in their organisation unlike other South Asian countries, for instance, India.

Looking at the trend so far, it may be right to say that Bhutanese media women quit after they get married and have children. That’s the time when they are senior enough to hold a higher position in their organisation.

Quitting becomes the only way out for media women when it comes to working for odd hours and at the same time balancing their professional and family life. They then take up a normal 9-5 job in a field other than media.

Probably, that’s how we lag behind as compared to other South Asian countries. Women scribes, for instance in India, as we learnt through out interaction with them at the SAWM meeting, work very late hours and do so whether or not they are married, which is why there are so many married – and happily married women journalists in the rest of the subcontinent.

SAWM is a forum for South Asian women in media to voice out their problems and at the same time it is forum that aims to eradicate or look into gender discrimination. However, in this case, we cannot call it discrimination based on gender.

Compare that to someone like Barkha Dutt, or Sagarika Ghosh, who are senior editors at NDTV and CNN-IBN television news channels and are national celebrities in that country. Alas, the highest woman we have in the media circuit is a Chief Reporter, that too, in just one newspaper.

In all these senses, the conference was an eye opener for the Bhutanese media women and now may be the time to change. And unless those changes take place, there will definitely crop in a gender bias in our mainstream journalism. That is what needs to be corrected, and now!
Posted by Hannah Gurung at 11:33 PM

Hannah Gurung
Unlike most journalists, I am a bit introvert. Perhaps that's what I need to change about myself.I believe in not trusting anyone apart from my own self!